We’re just arriving at Yellowstone National Park, and Old Faithful is erupting. Check it out!

Old Faithful is Yellowstone’s number one attraction, and draws upwards of 30,000 people a day during the summer.

Although it’s not the biggest geyser here in the park, Old Faithful is the biggest regularly erupting geyser with eruptions taking place every 60 to 120 minutes. Eruptions usually last between 1.5 – 5 minutes, and can shoot as high as 90 to 184 feet.

Since the videos in this post are 360° video, you can look around the entire area. Look around the video by either pressing the arrows in the navigation circle in the top-left corner of the video, or simply click and drag with your mouse. If you have a VR Headset, move your head around to hear the 360-degree Spatial Audio.

In this video, we avoid the crowds by hiking on the boardwalk and viewing Old Faithful’s eruption from a distance.

Old Faithful is surrounded by hundreds of other geysers and hot springs spread across the Upper Geyser Basin. Let’s go check out a few of the geysers here.

About half of the world’s geysers are located right here in Yellowstone National Park.

Flying above Giant Geyser at Yellowstone

When Giant Geyser erupted in 2015, it had been over 5 years since its last eruption. But 2018 has been a very active year for Giant Geyser as it has erupted 14 times so far. Eruptions from this spectacular geyser last about an hour and can reach heights of 180 – 250 feet.

You may notice a squad of “geyser gazers” behind me. These Yellowstone volunteers monitor nearly every aspect of the thermal features within the park. Many have been coming here for decades and know the basin better than anyone.

Grotto Geyser is an unusual looking thermal feature that is linked with the nearby Giant Geyser. Alyson and I agree that it kind of looks like a steaming giant crawling out of the ground.

Giant Geyser erupts every 8 hours, and shoots about 10 feet into the air.  Its eruptions can last anywhere from 1.5 to over 10 hours.

Where Oblong Geyser’s Colors Come From at Yellowstone

Oblong Geyser is prone to vigorous eruptions every 3 – 12 hours, and is named for the shape of its pool which is about 40 feet long and 10 feet wide.

It is estimated that more water is produced during an eruption than for Old Faithful which erupts much higher into the air.

Castle Geyser could be the oldest geysers in the basin, and it looks like an old castle tower in ruins. It erupts as high as 60 to 100 feet every 10 to 12 hours, and eruptions last about 20 minutes.

The hot bubbling water in South Scalloped Spring reaches temperatures close to 200°F (about 93°C). The ornate mineral formations around this spring are stained orange by a specific type of algae that thrives along the edge of this boiling pool.

Hovering Over Spasmodic Geyser at Yellowstone in 360 VR

Don’t fall in. Spasmodic Geyser erupts from at least 20 different vents centered around two large craters, and the temperature in these pools is about 198°F. Some of the vents only erupt a few inches high, while the tallest can shoot as high as 10 – 15 feet.

Hovering above the geyser, can you see a face in the landscape with the two large boiling craters as eyes?

We have a bunch of Yellowstone videos we’ll be sharing with you this week, but before we go, here’s a story from the West Thumb area of Yellowstone.

Here’s a peek at the West Thumb area of Yellowstone, along with a quick story about how to cook your fresh-caught trout in the geothermal hot springs (known as “Hook and Cook”). 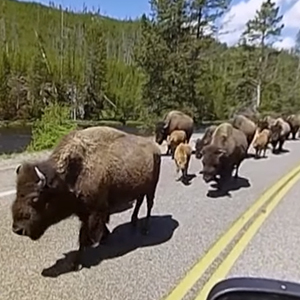 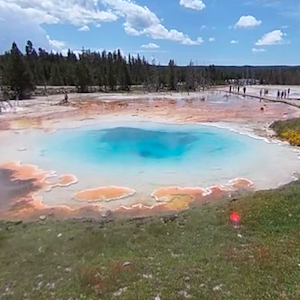 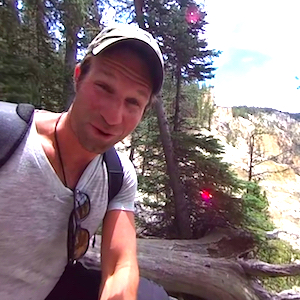 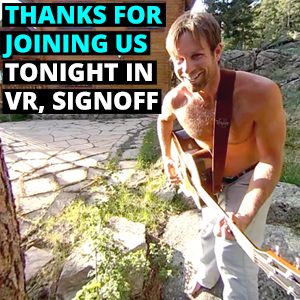 Thanks for joining us tonight in virtual time, signoff